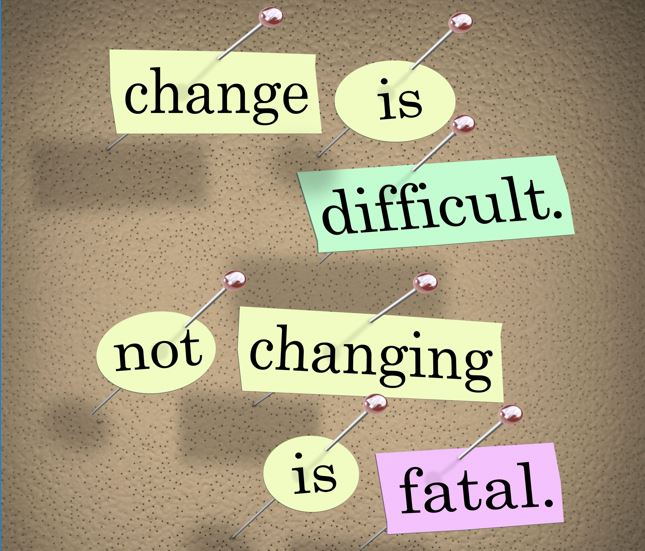 During a two-year research project, I studied the topic of “Leadership For Change,” and distilled key obstacles to organizational change and answered an age-old question: Why is change so difficult?

If you’re charged with leading any type of change, it may be therapeutic to know why your job, as a leader, is challenging if not outright hard.  It may be comforting to know that your challenges are not unique!

As a change agent, your job is hard because:

While involvement in the discussion helps to facilitate the acceptance of change, leaders cannot ignore an organization’s culture nor underestimate the norms and systems that enable resistance to block meaningful and sustainable change.

Effective leaders prepare people to adjust to change, help them deal with the pain of change, inform them about the progress of change, and show continued personal commitment to the change. This type of leadership forges a coalition of both internal and external supporters to gain approval for change.

Want a deeper dive?  Here you go… straight from my literature review, complete with the references at the end!

Change alters power relationships, undermines existing agreements and pacts, and intrudes upon deeply rooted symbolic forms, traditional ways, and ritualistic behavior (Yukl, 2002; Eisenback, Watson & Pillai, 1999; Nahavandi, 2006; Boleman & Deal, 2003). This underscores the issue of resistance to change, which also is constant. Boleman and Deal (2003) note that below the surface, when change occurs, the organization’s social tapestry begins to unravel, threatening time-honored traditions and prevailing cultural values and practices. They emphasize that although change creates division and conflict among competing interest groups, successful change requires an ability to frame issues, build coalitions, and establish arenas in which disagreements can be forged into workable pacts.

Boleman and Deal (2003) note that major organizational change generates four categories of issues. First, change affects individuals’ ability to feel effective and valued. Sudden announcements and unexpected developments make people feel like they have no control. Without support, training, and a chance to participate in the process, people become like powerful anchors, making forward motion almost impossible.  Resistance is a way of coping with an unexpected situation. Second, people often see change as threatening to their positions of authority (Zander, 1949, 1950; Senge, 1990).

Change disrupts existing patterns of roles and relationships, producing confusion and uncertainty. Structural patterns need to be revised and realigned to support the new direction. Third, people fear that change will result in some kind of loss, such as loss of status or privileges (Uris, 1986). Change creates conflict between winners and losers; those who benefit from the new direction and those who do not. This conflict requires creation of arenas in which the issues can be renegotiated and the political map redrawn. Transition rituals, mourning the past, and celebrating the future help people let go of old attachments and embrace new ways of doing things.

Goleman (2002) notes that when constituents feel strongly about particular issues, they resist change by revolving around the status quo and fighting off anything that threatens it. Leaders cannot ignore an organization’s culture nor underestimate the norms and systems that enable resistance to block meaningful and sustainable change. Goleman argues that resistance to change is a probable, normal, and complex part of the change process and that courageous leadership, stamina, and unwavering commitment is needed on the part of a leader to overcome resistance. Scholars agree that the change process is extremely messy and chaotic. Some insist that no universal set of prescriptions or step-by-step formulas exist for leaders to use in all situations to overcome resistance to change.

During times of major change, lack of information sets the stage for fear. However, involvement in the discussion, participation in planning, and implementation of change, opportunity to let off steam, full communication, and regard for the traditions of the group help to facilitate the acceptance of change. Often these norms are woven into the fabric of established power relationships. Rather than pushing harder to overcome resistance to change, Senge said that artful leaders discern the source of the resistance and focus directly on the implicit norms and power relationships within which the norms are embedded. He and other scholars emphasize that understanding predictable patterns associated with change helps leaders depersonalize resistance and begin to address the underlying root causes. Leaders who lead change can be reassured that resistance is normal, and that resistance can never be fully eliminated because it is part of the change process (Senge, 1990; Zander, 1949, 1950; Uris, 1986; Conger, Spreitzer & Lawler, 1999; Goleman, 2002; Boleman & Deal, 2003).

Effective leaders prepare people to adjust to change, help them deal with the pain of change, inform them about the progress of change, and show continued personal commitment to the change (Yukl, 2002). This type of leadership forges a coalition of both internal and external supporters to gain approval for change. However, literature rarely addresses how leaders who are immersed in managing organizational change internally are able to also effectively communicate externally and forge coalitions of external groups during times of great change.

There are varying views regarding remedies to overcome resistance to change. Lewin (1958) proposed that organizational change is a process that can be divided into three phases: first, by unfreezing the old culture; then, by changing or moving to the new level; and finally, by refreezing the changes at the new level.  He emphasized that understanding all three phases is important for leaders who implement successful change. Lewin said that an attempt to move to the changing phase without first unfreezing existing attitudes is likely to be met with apathy or with strong resistance. Bennis (1963, 1985) provides ten ways in which leaders can avoid disaster while also overcoming resistance to change. This includes leaders who lead with honesty, building support among like-minded people, making sure those representing the “old guard” are not frightened at the prospect of change, getting those impacted by the change involved in the planning, and learning everything there is to know about the organization and its local politics.

In contrast, Kotter (1995, 1996) outlines eight leadership steps for overcoming resistance to change, including establishing a sense of urgency by interpreting external events and focusing attention on threats and opportunities, creating a guiding coalition, developing a vision and strategy, communicating the change vision, empowering broad-based action, generating short-term wins, consolidating gains and producing more change, and anchoring new approaches in the culture. He says that the urgency rate is sufficient when approximately 75 percent of an organization’s management is convinced that “business as usual” is totally unacceptable. Kouzes and Posner (1995) found just five fundamental practices that enable leaders to get extraordinary things done while overcoming resistance to change.

First, leaders challenge the status quo to pioneer improvement through change. Second, leaders inspire a shared vision, breathing life into the hopes and dreams of others and enabling them to see the exciting possibilities that the future holds. Third, leaders enable others to act, demonstrating that leadership is a relationship founded on trust and confidence. Fourth, leaders model the way through personal example and dedicated execution. Fifth, leaders encourage the heart, enabling their constituents to carry on.

Other scholars emphasize that to gain approval for the change, effective leaders create enthusiasm for change by articulating an appealing vision that is relevant to the needs, values, and hopes of people and by gaining buy-in from the people who will carry out the change (Kotter, 1990, 1996; Yukl, 2002; Boleman & Deal, 2003; Zander, 1949, 1950; Goleman, 2002; Lewin, 1951). Effective leaders encourage a culture in which change is seen as a positive value rather than something to be feared, where all employees are actively involved in pursuing innovations that make organizations work better (Denhardt & Denhardt, 1999). Tichy (1996) notes that visionary leaders should develop three stories: Who I am, who we are, and where we are going to help people visualize and embrace change. This, Tichy notes, provides followers with a sense of control, participation, self-esteem and belonging to an organization that cares about them.

Alimo-Metcalfe, B., Alban-Metcalfe, R.J. (2001). The development of a new transformational leadership questionnaire.” The Journal of Occupational & Organizational Psychology, Vol. 74(1), 1-27.

Bass, B.M. (1990). Handbook of leadership: A survey of theory and research. New York: The Free Press.

Conger, J.A. and Kanugo, R. (1987). Toward a behavioral theory of charismatic leadership in organizational settings.  Academy of Management Review, 12, 637-647.

Couto, Richard A. (1993). The Transformation of Transforming Leadership. Paper presented at the annual meeting of the American Political Science Association in Washington, D.C.

Denhardt, Robert B., and Denhardt, Janet Vinzant (2006). The Dance of Leadership: The Art of Leading in Business, Government, and Society. Armonk, NY: M.E. Sharpe.

Kouzes, J.M. and Posner, B.Z. (1993). Credibility: How leaders gain and lose it, why people demand it. San Francisco: Jossey-Bass.

Malekzadeh, A. (1995). How leaders manage the six strategic forces. Manuscript.

Mumford.. E. (1909). The Origins of Leadership. Chicago: The University of Chicago Press.

Pearce, Craig L. and Manz, Charles C. (2005). The New Silver Bullets of Leadership: The Importance of Self- and Shared Leadership in Knowledge Work. Organizational Dynamics, 34(2), 130-140.

Schubert, Glendon A. (1960). The Public Interest: A Critique of the Theory of a Political Concept. Glencoe, Illinois: Free Press.

Sims, H.P (1977). The Leader As a Manager of Reinforcement Contingencies: An Empirical Example and a Model. In J.G. Hunt and L.L. Larson (Eds.), Leadership: The Cutting Edge. Carbondale, Illinois: Southern Illinois University Press.

Volberda, H.W. (1996). Toward the flexible form: How to remain vital in hypercompetitive environments. Organizational Science, 7(4): 359-87.

Your soundbites can build competitive advantage and support for change

How to FIND and BE a mentor